Just over 20 years ago I watched a Canadian production of a book, serialised for television. The story was about a young woman who had moved to a remote village in the forest as a school teacher. She fell in love ( There was a very erotic dream sequence with him rising naked from the water!! ) with a young man of the region and they married. Times were hard and children kept being born so the husband wanted to move to the city to find better paying work. She didn’t want to go. I remember she took her son to school and the teacher said that she’d put him with younger children because children from the country are slower. She knew that her son was exceptionally intelligent, she was a teacher after all. There was a lot of unhappiness. Then for some reason they were back in the forest. The husband was drinking heavily and there was snow everywhere so she set off to get help as she was about to give birth. She gave birth to a baby girl alone in the snow. The baby was called Blanche.

I seem to remember that Blanche died and she became depressed. I can’t remember the end of the story or any of the character’s names besides Blanche. I do remember that certain scenes were in the French dialect of the region, which I adored, though there were subtitles too. The French authorities didn’t like this idea much and the later episodes were dubbed into ‘proper’ French. Any ideas as to which book I’m thinking about. Does anyone remember the TV dramatisation? I’d love to find the book and read it.
Posted by Anji at 5:48 PM 7 comments:

Email ThisBlogThis!Share to TwitterShare to FacebookShare to Pinterest
Labels: Books 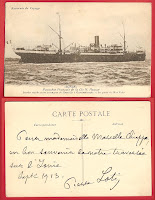 Rob gets annoyed with me sometimes as I become involved in reading the backs of our postcards. In order to keep up with the higher and higher costs of eBay we have to present as many postcards as we can for auction – a lot of work. This postcard was easy to read and I recognised the signature at once; Pierre Loti, a French writer who lived very close to where I live now. I checked and double checked. I can’t prove that he was on that particular cruise ship but he did return from that direction at that time. The signature and the writing are his.

“For Mademoiselle Manuelle Chiappa, In memory of our crossing in the Ionie. – Sept 1913”

The young lady he dedicated the postcard to seems to have had a few admirers – I know because I’ve been reading the backs of her postcards….

One day I will find one written by Colette I am sure.

I don’t normally do politics, but…

We were granted French nationality on the 24th September 1990. since then we’ve made an effort to vote at every election and France, being France, there have been a few. In 2002 the extreme right-wing candidate Jean-Marie Le Pen almost became President. Everyone expected everyone else to vote and you can always expect the followers of the extreme candidates to turn out and vote, which they did.

At the time I was teaching problem teenagers. Most of their families came from northern Africa and quite a few from Portugal. I’ll always remember that Monday morning at about 10.15, we had just entered the classroom when one of my pupils asked “Will we have to return to our home countries Madame?”. He had fear in his voice and the class quietened down more quickly that usual to hear what I had to say. They knew that I was an immigrant too and that Monsieur Le Pen was non too fond of the English. I assured them that there was another round to the elections in two weeks and that most people would never allow such a thing to happen.

Later I went into the head of department’s office to hear one of my colleagues repeating what Rob had been saying without pause since the results were known the evening before; Everyone had been too confident and not taken the election seriously. Both threatened not to vote in the second round. Everyone took to the streets in the two weeks that followed to protest. One of the moments when I was proud to have French nationality. Our choice was between the devil and the deep blue sea. Monsieur Chirac wasn’t too popular at the time either, but he was a better choice.

The European elections are coming up very quickly, some might not think that they are important. I can give you plenty of links of sites covering the horrors of two world wars. I’ve read postcards sent from the hell of the trenches. Europe is important, especially as the world is in such a mess at the moment. Whatever you believe in it doesn’t matter – just VOTE!
Posted by Anji at 8:43 PM 2 comments:

I probably haven’t mentioned before that I only ever phone my mother up in the mornings. The reason why I do this is because later in the day her speech would be too slurred and she probably wouldn’t remember who I am. When I was very small I remember someone inviting her to drink a glass of sherry at Christmas. It took a lot of persuasion and she accepted half of a very small glass and sipped it as if it were poison. Lots of things happened it the 35 years that followed….

I’ve been blogging for 6 years this month. When I first started blogging Christian became ill and it was through my blogging friends I understood what was going on and felt that I wasn’t alone. This morning I received an e mail from Stacey (on the left). Stacey and Bill live in Cleveland Ohio. They too went through the lot with their youngest son, a young man who is a brilliant guitarist and I wish I knew where there was a link so that you could hear him play.

The email said; “Saturday, the IRS letter designating the Room 12 Blues Foundation a 501 (c)(3) charity came in the mail” I didn’t understand what it meant at first either, so I looked at the site… So if you are interested and live in Cleveland you now know who to contact!
Posted by Anji at 8:55 PM 10 comments:

If you could see my forehead today you’d see that it had the word ‘Idiot’ written on it. Yesterday I was very, very stupid. The day started with breakfast on the port. This is pleasant enough but involves eating croissant and baguette. Both are the worst things to eat for someone diagnosed as pre-diabetic. Later, I bought some bread from the supermarket as this is a holiday weekend here too. I chose old fashioned baguettes as the flour is different and slightly better for you. We had a sandwich for lunch which I don’t usually have these days, though I did have a plateful of salad with it. Olivier worked his first full day at the towers so Rob suggested McDonalds as a treat for him. Again I had salad but the burger bun is white bread, then I couldn’t resist a mcFlurry with crumble topping…

My blood sugar reading wasn’t as high as I expected it to be after such a sinful day but I woke up in the night feeling dreadful and I had indigestion . Today I feel… hung over!

Recently we were shown the documentary Super Size Me on French TV where the brave Morgan Spurlock submitted himself to fast food and no exercise for a month. He damaged his health more than anyone would have imagined. He was very healthy and fit at the start, I wonder what would have happened if he hadn’t have been so fit..

Recently I’ve lost a bit of weight, just be being sensible and cutting down on quantity. I’ve also been feeling very well and having good blood sugar readings, despite a little treat from time to time. I’m so disappointed with myself for sliding so far backwards
Posted by Anji at 8:56 PM 5 comments: