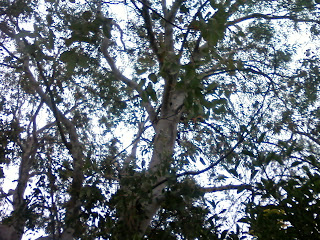 Nearly 20 years ago I bought a packet of seeds from the supermarket; they were Eucalyptus seeds. It seemed ambitious growing a Eucalyptus tree from a tiny seed, I couldn’t afford a baby tree, so I thought I’d give it a go. At first I put the seeds into small pots they I transferred them into bigger posts and later when they were even bigger planted three of them in the garden. 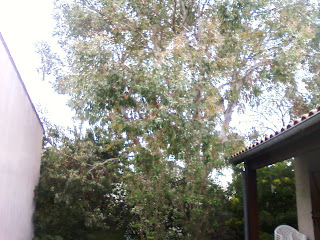 During the first year I didn’t think that they were growing. I started to measure them once a week – and they were!. They all grew for a couple more years until they were coming along nicely. Especially the one which reminded me of a graceful lady in long skirts. In the mid nineties we had a very cold winter. I knew that the trees could withstand up to -15°C, so I wasn’t too worried. Unfortunately, the end of the winter was very windy and all three of my trees looked as if they had died. The graceful lady in long skirts had been the largest and closest to the street so needed cutting down because as the tree rotted the branches would become dangerous. 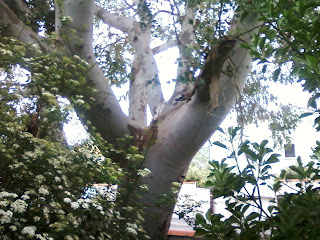 One of my kind neighbours said that he would cut the tree down, another would cut up the wood and take it away to use (we didn’t have a fire place). When the tree was cut down we discovered a small shoot which looked alive, so we decided to leave it and see what happened. 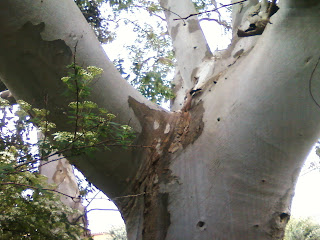 The small shoot grew from strength to strength and soon became a big tree, much bigger than we imagined it would ever become. This time the tree was definitely male, strong and straight.

These pictures were all taken this spring