We’ve recently seen the film Bohemian Rhapsody and since then Freddie Mercury and Brian May seem to be cropping up all over the place online. I’ve been especially interested in Freddie’s love for cats. We had four cats as I was growing up and I loved sharing the house with them (except for winter mornings when one or another cold damp cat would try to get into bed with me).

This morning as I woke up a grain of an idea manifested itself; I had seen someone like Freddie holding a cat somewhere before. I managed to find a surviving scan of a rare photograph/postcard we sold of French writer, Pierre Loti, holding one of his cats. Like Freddie he was famous for his love of cats, he loved flamboyant clothes and was possibly bisexual. And the moustache is very similar too! Here are a couple of blog posts. 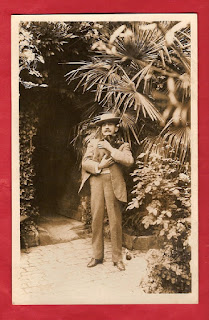