Every Tuesday afternoon I have an hour of conversation with my longest running student. She’s a retired history and geography teacher (history and geography are taught together in France). We always have plenty to talk about; the news, history, geography, Google, families, women, literature, religion… we discuss everything.

For several months now we have been reading '1066 And All That' when we’ve finished the round up of our weeks.. I’ve read it a couple of times in the past and now I have the insight of a history teacher and Latin scholar, who came first in her year at La Sorbonne (but there wasn’t another university in those days she modestly claims). She sees a lot of humour that I missed and sometimes I have to explain things to her. We’re on the War of the Roses* at the moment. Unfortunately I can never remmber which colour was which so I have homework to do before our next lesson….

If you’ve never read '1066 And All That' I strongly recommend it.

I found magnetic coloured letters the other day in the bottom of a vase,
Hurriedly tidied away one lunch time long ago.
A few weeks before; a box of paints -
“Don’t open those today, use up the old ones”
Never used.

Today my son reaches things down from a high shelf or lifts a heavy bag,
My daughter passes orange juice to me in one of her glasses

If you have never heard of the Shadow People I suggest you read about them here (Though ours seemed to be quite friendly). I started to see our Shadow People as soon as I moved here 22 years ago. They passed in front of the house usually, but it wasn’t until Dom and Olivier were around 10 and 8 that I discovered more about them. I spoke to Dom and Olivier because Christian happens to be the least spiritual (though he’s had more experience – I’ll have to talk to him one day to see where he is on that ). I explained that I’d just been reading about some people called the Shadow People and they both knew exactly, together at the same time, that I was talking about the ones who passed in front of the house. We’d never discussed them before. Well, a few years later when Christian was very ill the Shadow People started to come into the house. I was aware of them passing in the corridor leading to the bedrooms. I think that they could sense that there was a problem.

They haven’t been around for a while and I have two explanations for that. First the gardens around here have started to be pulled up and new houses built. It is quiet, but not the same as before. The other reason was that one night I’d gone to bed and Rob stayed up late working on the computer. He woke me up in a panic as he was sure that someone had walked down the corridor, he thought it was me. I just told him not to worry about it as it was probably a Shadow Person (then I had to explain who they were). Perhaps they went away because his reaction frightened them, or perhaps they were worried that they had frightened him. I do miss them.
Posted by Anji at 3:38 PM 9 comments: 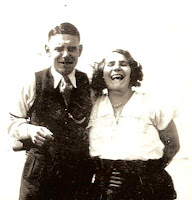 Remembering how my grandmother used to sleep in the afternoons when I went to stay with her as a child. When I was 6 years old she was 50. I’m three years older now and I don’t have a nap in the afternoon, if I do go to bed during the day it’s because Rob and I are having a little sieste – as we call it…

All this has come about because AOL France recently started a debate on dressing your age. I was pleased to read that most of the ladies commenting were around my age and we all still treasure our jeans. There was a general agreement that micro skirts and cropped tops at our age were out, but with a bit of adaptation women our age could give the youngsters a run for their money.

My grandmother went to the hairdressers every week on Friday mornings. She wouldn’t have dreamt of colouring her hair (perhaps a lavender rinse). Isn’t it wonderful that we aren’t expected to follow rigid rules and regulations any more?
Posted by Anji at 7:10 PM 6 comments:

Poem of the day

This poem is also mentioned on my other blog. I think that it is important enough today to be mentioned here too. Just over a year ago the writer, Isaac Stolzfut, went out for a walk and never returned. Today would have been/is his 89th birthday…
Posted by Anji at 6:48 PM 4 comments:

George Sand and the history of photography

I was preparing a semi-modern postcard the other day of La Vallée Noire, photographs of George Sand surrounded by some of the places she had written about. This got me wondering about the dates of the first photographs in existence. So with the help of Google and Wikipedia I did a little research and found this site, which shows several firsts in the history of photography. Images have been captured since as long ago as 965. The first photograph as we think of it required an 8 hour exposure back in 1826 (that would limit the admissions to flickr albums). Anyway back to George, her photograph was taken in 1864. Now I must start reading her books

Rob wondered about photographs of Charles Dickens a few days before. I found one taken in 1867/8
Posted by Anji at 3:52 PM 10 comments: